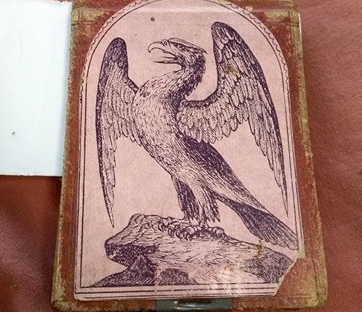 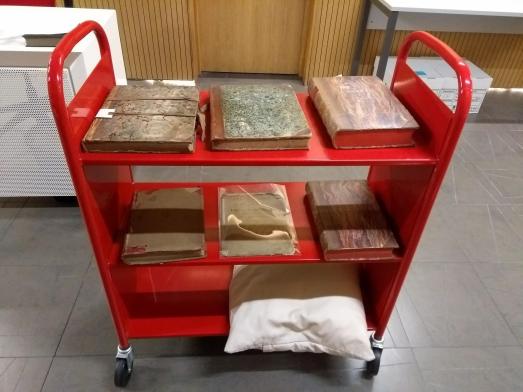 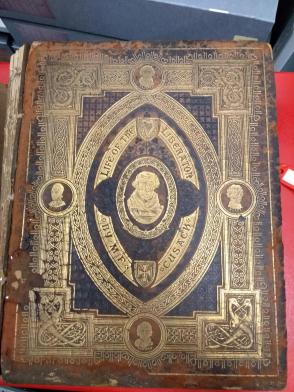 This week marked the halfway point of my internship at Liverpool Hope University’s Sheppard-Worlock Library, and week four brought fascinating manuscripts, some beautiful ephemera, and the return of an old friend. To recap, my main task is to sort through the uncatalogued pre-1900 material that is housed within the Special Collections department and research anything that could be useful for History undergraduates during their dissertation research. This information is then entered into a database in the hope of enticing undergraduates into the department, and to encourage them to consider archival research for a more unique and original dissertation topic.

My main task for this week was to finish cataloguing the Talbot Collection which included both printed volumes and manuscripts, before checking and correcting my entries next week. I began the week by tackling the final printed volumes in the Talbot Collection, which are some of the largest books housed by the department, many of which probably weigh more than I do! I didn’t have high hopes of finding any useful material in this section as the texts were ostensibly predominantly religious in content again, however, I am happy to say that I found some fascinating volumes that made the cut for the database. The best part of this internship are the many opportunities I have of learning from the texts that I am cataloguing, and every day brings new knowledge on topics as varied as library terminology, British monarchy, religious laws, and Irish history. 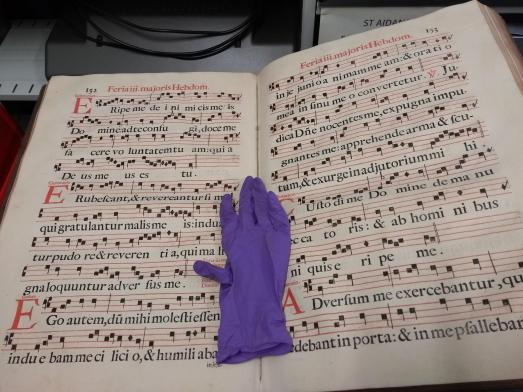 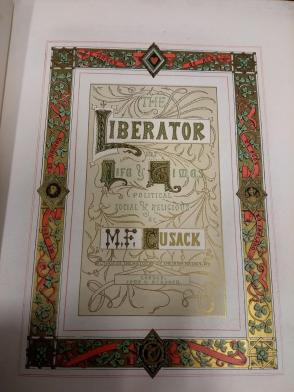 These final texts are also potentially the most beautiful and detailed volumes in the collection, and contain wonderful illustrations, stunning book covers, and of course, lots of information for me to devour and enter into the database. Some of my more fascinating finds include volumes on Quakers both in Britain and aboard from the origins of the movement in the seventeenth century, and a book on trials and treason from 1776 which covers everything from notable trials including that of The Gunpowder Plot conspirators, to cases of libel, regicide, bribery, bigamy, and my personal favourite, breaking a painted church window.

However there are also other, somewhat less pleasant things of interest to find within the dusty volumes. Throughout my internship I have found evidence of the damage done to the texts by insects and bugs over the centuries, and on Tuesday, I encountered my first ever bookworm hiding in the pages of a seventeenth century volume about religious and political struggles in England. The offender crumbled away to dust at my (gloved) touch, as did several other critters that I found nestled between the pages of the book, but there are probably more of them hiding away amongst the department’s uncatalogued texts. Needless to say I am not so keen on referring to myself as a bookworm anymore 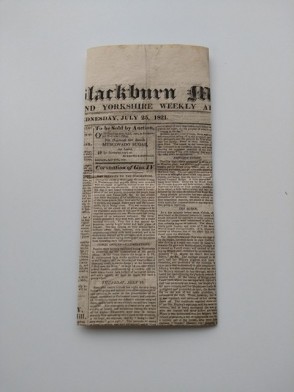 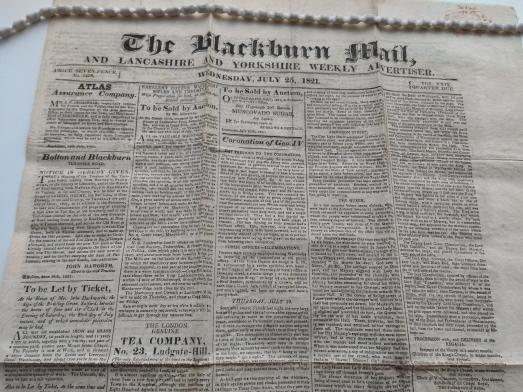 During the past month I have unearthed some beautiful and forgotten mementos of bygone times hiding between the pages of the texts in the shape of booklets, prayer cards, and newspaper cuttings, however, on Wednesday I found my most breath-taking example yet. Whilst perusing Richard Baker’s seventeenth century volume on the monarchy of England, I found what looked like a slip of newspaper in between the pages. On closer inspection, however, the paper was revealed to be an edition of The Blackburn Mail dated July 25, 1821 and is folded in a manner which makes it seem as though it has only recently been put aside by the owner, who perhaps intended to return to it at some point. The newspaper contains a piece on the coronation of King George IV which took place just two days earlier, and one can only wonder whether the owner was inspired to read this volume after reading the article about their own King in the newspaper, or whether they intentionally inserted it into the volume on the history of the monarchy, choosing to leave behind their own piece of history. Following this discovery I decided to add a new field to my database to include these little bits of history: ephemera. By inserting a field dedicated to ephemera, I can now record what I believe are valuable and historic tokens and treasures which provide a glimpse into forgotten eras, and are themselves pieces which speak to us across the years and should be valued.

My most interesting task this week was to go through the manuscripts and to try and decipher any that could be potentially useful. There are two sections of manuscripts in the Talbot Collection, the first of which is a collection of seemingly random manuscripts owned and compiled by many different people. Although some of them had surprisingly beautiful contents such as music manuscripts and a prayer book written in what appears to be short hand, sadly, there was only one potentially relevant to my database which was a book of handwritten extracts from Dr. Samuel Tissot’s eighteenth century medical textbook, Avis au peuple sur sa santé. 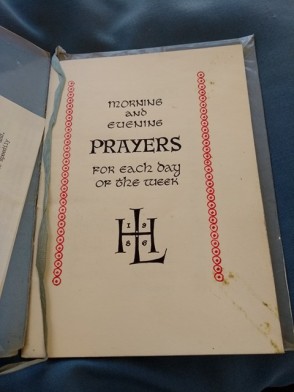 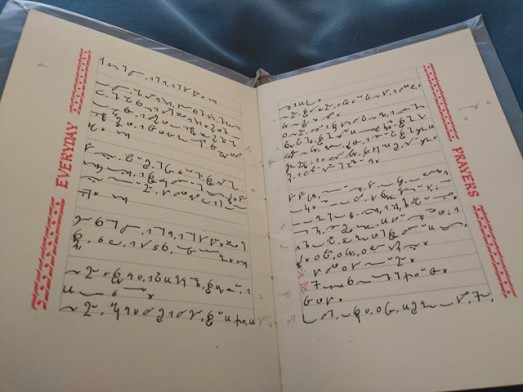 However, the second lot of manuscripts were compiled by my old friend, the Rev. Thomas Abbot. So far his marginalia had given me clues to his character and his traits and I have begun to build up a picture of a man who is intelligent, fair and open-minded, and just a little bit eccentric. His manuscripts also reflect this and add to the portrait of the wise and humble priest that I have gotten to know over the last month. Truthfully, I can’t help but think of literary characters such as Albus Dumbledore from the Harry Potter books when I uncover Abbot’s knowledge and eccentricities. 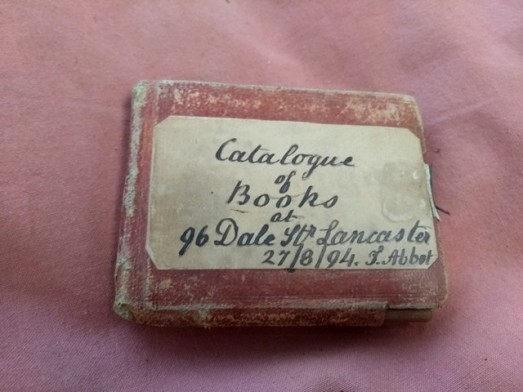 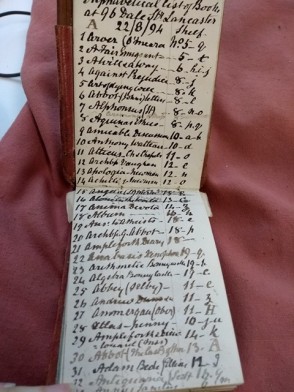 Although my fingers are itching to transcribe all of Abbot’s manuscripts and marginalia rather than just snippets which are relevant to my History database, I know that I must remain focused on my task, and that that is a job for some lucky person in the future. There is one particular manuscript that is bursting with anecdotes, notes recipes and cures (including one for small pox!) that I would dearly love to transcribe. His recipes for rhubarb, mixed fruit, and vine leaf wines are also particularly interesting. Another highlight was his home-made catalogue of all of the books he owned whilst living at 96 Dale Street, and their shelf numbers, arranged in alphabetical order.

An absorbing manuscript full of letters from people including his brother, John Abbot, also found its way into my database and demonstrates that Abbot valued the experience and knowledge of other people just as much as his own. The icing on the cake for me personally this week though has been my discovery of a small handwritten booklet of Abbot’s which was tucked away inside a volume about relics of martyrs, and is certainly delicate and fragile enough to rival the Brontës’ tiny books.

Some of the difficulties I have faced this week have included the deciphering of the manuscripts, the separation of the information into different categories, and how to decide on a consistent criteria which others will be able to follow and continue with in the future as the project expands and grows. Next week is a shorter week due to my upcoming trip to the British Library but it will be a period in which I can use the time effectively to check my work and rectify my own errors rather than the previous intern’s before deciding which texts to tackle from the Gradwell Collection. As always, I am looking forward to the challenge.

By Nicola F. a.k.a. The Brontë Babe

All photos appear with the kind permission of Liverpool Hope University. Please do not copy or share any of these images.

1 thought on “Diary of a Special Collections Intern: Week Four”

Discovering the Kings and Queens of Classic Crime Fiction