The Brontë Parsonage Museum was originally known as Glebe House when it was built in 1778-9. Its very first occupant was the Reverend John Richardson who died in 1791. Following Richardson’s death, James Charnock officially occupied the Parsonage until his own death in 1819, but it remains unclear just how much time he actually spent living there. The next arrival was Patrick Brontë in 1820. Patrick and his young family moved there from the nearby village of Thornton, and over the course of the next four decades, the house was witness to both tragedy and triumph. In 1821, Maria Brontë died and Patrick was faced with the prospect of raising six small children alone. However, Maria’s sister, Elizabeth Branwell, moved to the Parsonage permanently from Cornwall in order to help Patrick raise his children. More tragedy included the deaths of the eldest children, Maria and Elizabeth, in 1825 aged just 11 and 10 respectively.

The Parsonage is of course the place where the Brontës completed their literary apprenticeship in their youth by dreaming up their imaginary worlds of Glass Town, Angria, and Gondal. They initially acted out their narratives with their toy soldiers, then, once the soldiers, or the Twelves, found their way into written stories, they created their famous tiny books, eventually abandoning the toys and moving onto full-sized but secret manuscripts. The paracosmic worlds of Glass Town, Angria, and Gondal paved the way for the siblings’ later literary successes.

Triumphs included the publication of the novels of the surviving sisters including Charlotte’s Jane Eyre, Emily’s Wuthering Heights, and Anne’s Agnes Grey in 1847, in addition to Branwell’s poetry which was first published in The Halifax Guardian in 1841. However, tragedy reared its head again with Branwell’s addictions and death aged just 31 on 24th September 1848, Emily’s death three months later on 19th December 1848, and Anne’s passing on 28th May 1849 aged just 29. Although Charlotte went on to publish two more well-received novels (Shirley and Villette) and married Arthur Bell Nicholls in June 1854, she died aged just 38 on 31st March. Patrick continued to live at the Parsonage until his own death on 7th June 1861 aged 84.

I never tire of looking at photos of the Brontë Parsonage and artwork inspired by it. I take so many photographs each time I visit Haworth. Not only is it a beautiful building constructed from local millstone grit, the fact that it was home to such a remarkable family means this it is a source of endless inspiration to millions of people from around the world. Over the years my inspiration has been channelled into essays and presentations about the lives and works of the family, and of course, a couple of blog posts. Others though are able to channel their inspiration into something more creative and create some beautiful art. I never tire of buying these pieces when I can get my hands on them either. Just looking around my bedroom, I can see models, prints, and paintings which have been inspired by the Parsonage.

On my walls hang two prints of the Parsonage, one of which is the amazing piece pictured above by the immensely talented Amanda White. This piece is extra special to me as it features the toy soldiers and one of the Brontës’ famous tiny books (the third issue of the Young Men’s Magazine for October 1830, which was actually written on August 23rd 1830). As regular readers will know, I study and am obsessed with the Brontë juvenilia so when I saw this print, I knew I had to have it.

The second print is the one above which I bought from St. Michael and All Angels’ Church for about £2 a few years ago. It depicts Haworth on a bright and beautiful day and I just adore it as it reminds me of the day I first visited the Parsonage in 2012. The artist is Pat Bell, but unfortunately, I don’t have any more information.

I also have this beautiful little model which my mum bought for me as a present from the actual Brontë Parsonage Museum several years ago. It sits on my bookshelf in front of my Brontë books, as you can see from the photos above. 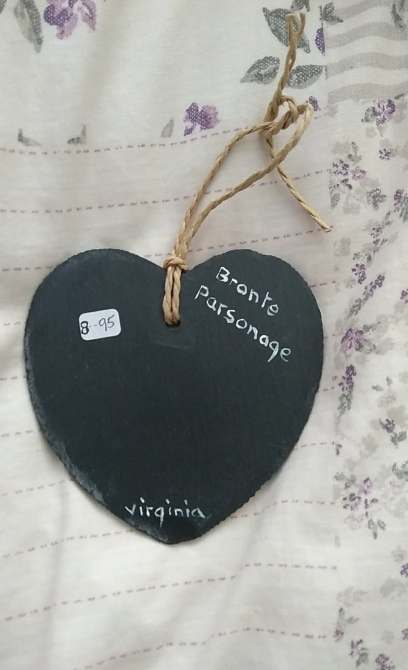 The ornament pictured above is the Brontë Parsonage painted onto a piece of slate. I purchased this from a small shop in Haworth a few years back. The colours are so bright and beautiful. I assume that Virginia is the artist responsible for this piece. Many thanks, Virginia!

And finally, you can see the newest addition to my collection below. 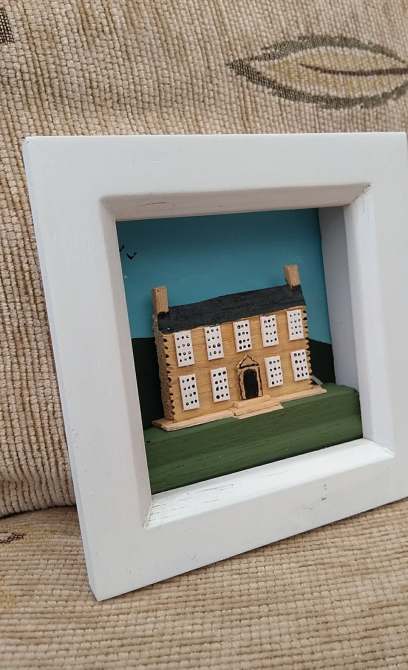 This is a wooden model of the Parsonage inside a box frame and the best part is that it didn’t cost me a penny as it was made by my dad. 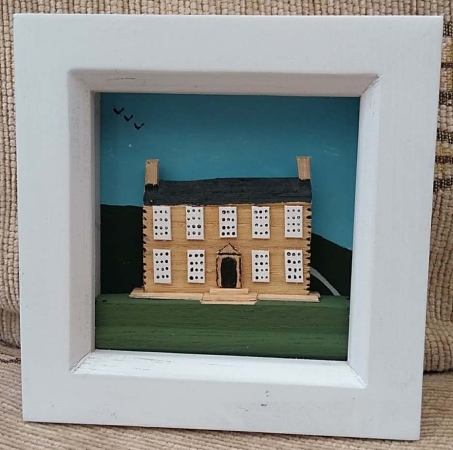 As you can see it has a quirky, slightly rustic charm to it, and I love the 3D effect. 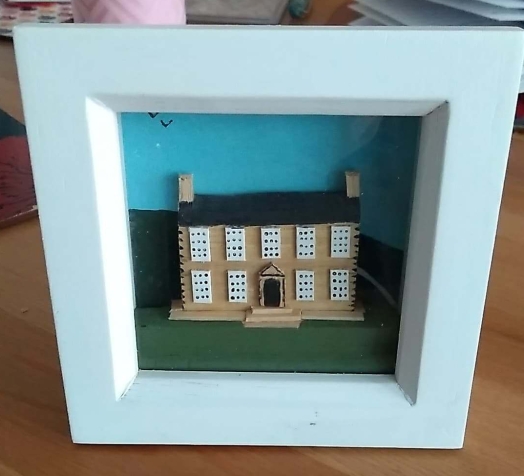 My dad is the latest in a long line to be inspired by the beautiful Georgian façade of the Brontë Parsonage. Have you or anyone you know ever been inspired by the Parsonage to create art? Maybe I’ll work on my own one day. Leave your comments below.

Blogger and writer who doesn't get out of bed for anything unrelated to the Brontës or time travel. Debut novel, A Tale of Two Glass Towns, coming soon. If you like what I do, please consider following/supporting my blog or via the links below: https://ko-fi.com/brontebabeblog https://twitter.com/BronteBabeBlog https://www.facebook.com/BronteBabeBlog goodreads.com/brontebabeblog View all posts by Brontë Babe Blog

10 thoughts on “The Brontë Parsonage”

Blogger and writer who doesn't get out of bed for anything unrelated to the Brontës or time travel. Debut novel, A Tale of Two Glass Towns, coming soon. If you like what I do, please consider following/supporting my blog.

Reading is my favourite occupation, when I have leisure for it and books to read' - Anne Brontë

A lovingly sarcastic journey through all of Sweet Valley High, for grown folks

This blog is a selection of interesting things I've come across during my history research. I have a wide interest in history ranging from Wars of the Roses, country houses, Stuarts, Georgians, Louis XIV, Napoleon and criminals. So expect to see a bit of everything on here, with a focus on little known stories.