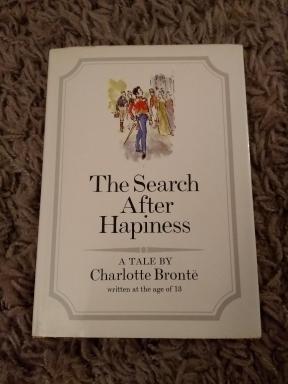 The Search After Happiness is a short story written by Charlotte Brontë when she was just thirteen years old. The manuscript is one of the Brontë children’s “tiny books”, written in mock magazine style, and is now housed in the British Library’s archives. The manuscript contains many errors and revisions, one of the most prominent being on the title page where the young Charlotte had initially dated the text 1828 before crossing this out and replacing it with 1829.

The Search After Happiness Manuscript at the British Library

The narrative itself is a curious tale of one man’s search for happiness in remote and strange places. Although the main text does not specifically mention Glass Town by name, Brontë’s preface states that the narrative is set there, and that the characters of the Chief of the City and his sons are the Duke of Wellington, the Marquis of Douro, and Lord Wellesley. The protagonist of the tale however is Henry O’Donell, a character never used again in the juvenilia, who meets Alexander Delancy, a character also searching for happiness and never used again by Brontë.

The narrative begins with O’Donell’s self-imposed exile after striking another nobleman during an argument. After making his apologies and meeting with the King he decides to quit the city forever, and bids farewell to the young princes, who caution him about his search for happiness in an unfamiliar place where he is unknown to all. O’Donell resolves to go anyway and the princes each gift him a lock of their hair to remember them by and to take on his journey.

The following day O’Donell meets Delancy, a native of France who is also in pursuit of happiness. After talking, eating, and sleeping, the two men decide to travel onwards together, initially finding a mysterious passage which after two days finally reveals a new world at the end of it. The two men finally emerge on top of a high rock with a storm raging around them. They continue their journey for days, arriving at a forest and eating the fruit from the trees before entering a vast glen surrounded by mountains, the tops of which Brontë states are lost in the clouds.

At the foot of the mountain O’Donell and Delancy fins a cave where they remain for many years. One night they are seated at the fire in the cave and O’Donell thinks of his former life in Glass Town. They hear a voice outside the cave and Brontë introduces an old, unnamed man whom they find an old man lying on the ground. After O’Donell makes the old man sit by the fire, he proceeds to tell the story of his own travels, and how as a young boy he himself was hurried out of his home city Moussoul by an old man.

He describes a journey very similar to that of O’Donell and Delancy and how after drinking from a fountain of clear water he found himself in a luxurious palace. Inside the palace was a lamp as radiant as the sun and thousands of fairies and genii who sang. After the song, the palace faded away and the old man looked very stern and bade him to follow him up mountains and through valleys. Ascending the mountain took two months and after this they arrived at a large temple where the old man seized him, dragged him to the altar and made him promise to be his servant for ever. He kept his promise, however one day he was eventually dismissed and spent many years wandering the world. One day he lay down by a bank by the roadside and suddenly felt himself lifted into the air by invisible hands. He continued his course through the clouds for some time after losing sight of the earth. Then he fell into a swoon and woke up outside of O’Donell’s cave. The next morning, O’Donell notices the bed of leaves that the old man slept in is empty. Going out of the cave he notices the red fiery sky and black clouds in the distance and two large rocks. Between these rocks he sees a chariot of light and in it sat the old man. O’Donell communicates this to Delancy. 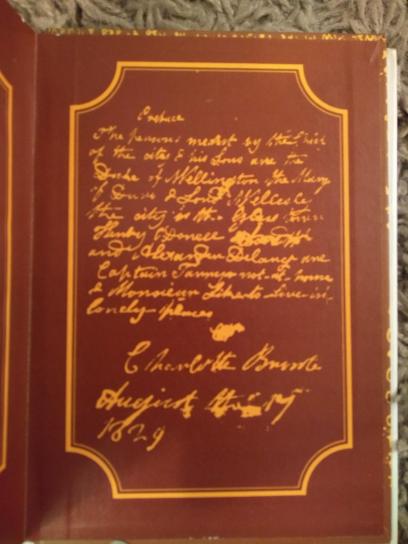 Some years later, Delancy is collecting fruit from the forest but does not return. Alarmed, O’Donell searches all over for him but cannot find him and months later, Delancy still has not returned. O’Donell thinks of the Duke and the princes, and finds the parcel given to him by the boys containing locks of their hair. He remembers the princes’ words not to forget them and wishes he could see them and their father again.

Suddenly O’Donell hears a clap of thunder and a mysterious figure appears who commands him to return home and surrender himself up to the figure’s power. O’Donell promises this and instantly finds himself at the door of the castle in the land of his birth. Continuing his journey he arrives at Glass Town and enters the palace by a secret entrance. He recognises the two handsome young men inside as the princes and throws himself at the feet of the Duke.

O’Donell tells his story and when he is done a loud voice tells him that he is free from his promise and can spend the rest of his life in the city. Some time later he sees a gentleman in street that he thinks he has seen somewhere before. After a short conversation he discovers that his name is Alexander Delancy, a rich merchant from Paris who is in favour with Naopleon. Brontë gives her characters the happy ending they have been searching for and states that they lived happily ever after in their separate cities.

Although it lacks the sophistication of some of Brontë’s other early works, such as her fantastic short play The Poetaster, written the following year, it is an enjoyable little tale with plenty to puzzle the twenty first century reader. However, its literary significance for many critics lies in the fact that the manuscript features Brontë’s earliest known poem, which is now referred to by its first line, “In this fairy land of light.” Overall it is an enjoyable and short read which hints at some of the supernatural elements found in her later work; one particular scene where O’Donell calls for Delancy and thinks he almost hears a reply cannot fail to strike a chord with lovers of Jane and Rochester.

By Nicola F. a.k.a. The Brontë Babe

I’d also love it if you stopped by The Journal of Juvenilia Studies where you can read my essay, “Autobiography, Wish-Fulfilment, and Juvenilia. The ‘Fractured Self’ in Charlotte Brontë’s Paracosmic Counterworld”.

My horror and other writings